At the end of November, the total equity market capitalization of companies listed on AIX exceeded 49 billion US dollars.

In November 2021, the total traded value on AIX was 31,839,858 US dollars, 2.2 times higher than the previous month. Equity instruments traded in excess of  13.2 million US dollars, establising November as the best month of 2021.

As of the end of November 2021, 125 issues of securities from 81 different issuers were included in the AIX official list, including 2 ETFs (Exchange Traded Funds) and 16 ETNs (Exchange Traded Notes). AIX trading participants  comprise 18 Kazakhstani and 11 international brokers. More than 155 thousand investor accounts have been opened in the AIX Central Securities Depository.

Eurasian Resources Group  chose AIX as the main platform for the future placement of shares for its subsidiaries: the shares of Sokolovsko-Sarbayskoye Mining and Processing Production Association, JSC; Kachary Ruda, JSC and Eurasian Energy, JSC were included in the Pre-IPO sector in November. 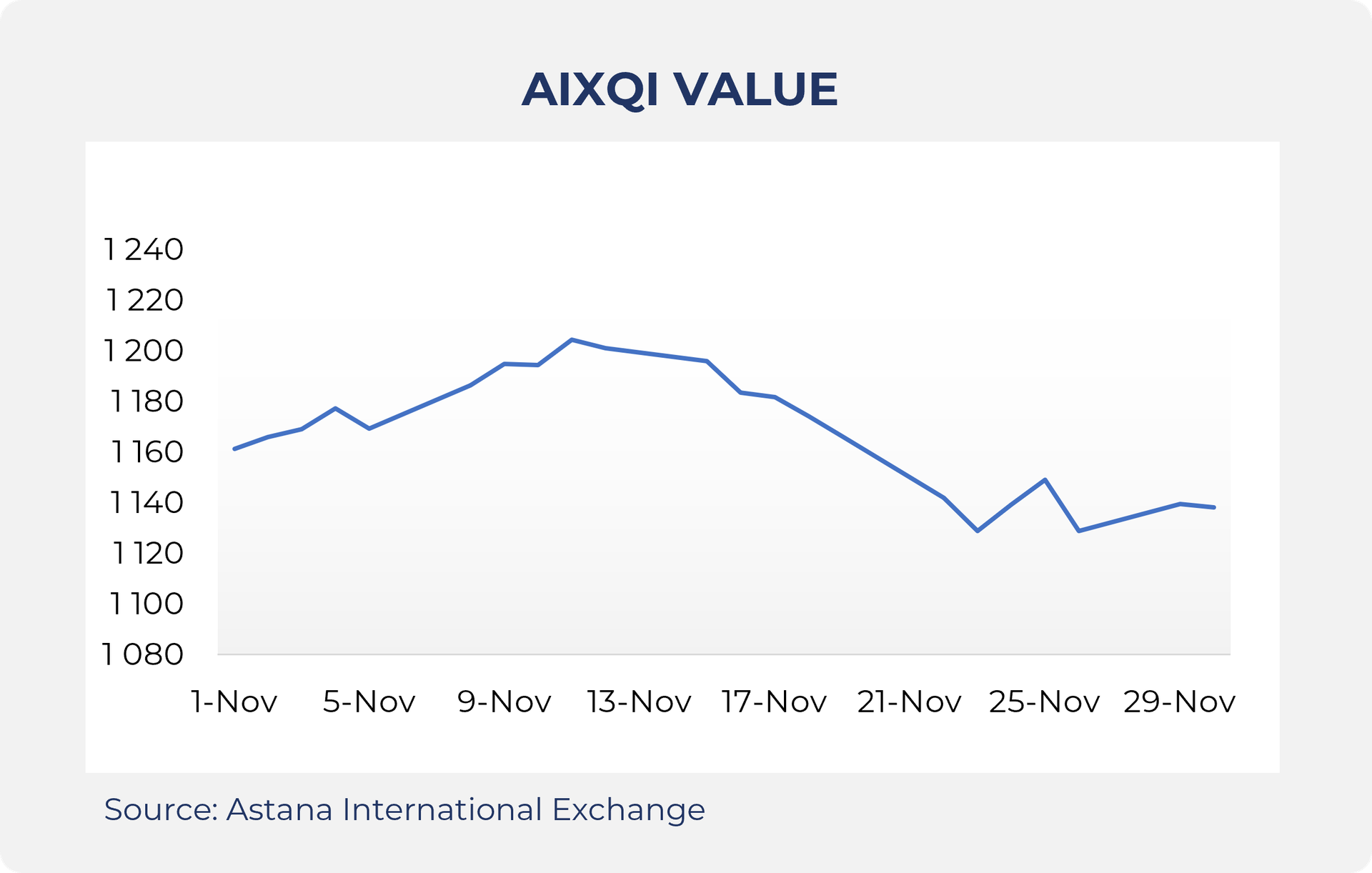 In November, the AIXQI index decreased by 3.05%, from 1173.98 to 1138.21 points, 5 out of 8 index constituents  ended the month in negative territory  amid uncertainty in the market caused by the spread of the new omicron coronavirus strain.

Shares of banking sector companies included in the AIXQI index ended the month in different directions – the top performer  was  Bank CenterCredit,  which grew by 43%, and it ultimately led to an increase in the bank’s quotes by 6.33%. while shares of Halyk Bank and Kaspi were lagging behind, showing a decline of 8.49% and 8.98%, respectively.

KazTransOil shares rose by 3.13% in November as the market reacted positively to the company’s official statement on expanding the scope of its activities, ignoring a 5.1% decrease in the company’s consolidated net profit for the first 3 quarters of 2021. Despite Kazatomprom’s announcement on signing an investment agreement with Genchi Global Limited to invest in the ANU Energy physical uranium fund, registered on AIFC, as well as the agreement to supply  natural uranium concentrate to large Chinese energy companies, share price of the national company at the end of the month showed  a decrease of 3.7%. Metals sector shares ended November with little change: Polymetal increased by 0.49%, while Central Asia Metal declined by 1.76%. Kazakhtelecom shares were the least volatile in November and ended the month with a slight decline of 0.55%.