The COVID-19 pandemic that the world is facing in 2020 has forced governments to urgently take additional measures to prevent further deterioration of the epidemiological situation. This is a restriction of the mobility of the population, the transfer of enterprises to remote work, or the complete suspension of the activities of companies that are unable to work remotely.

The measures taken, combined with the overall economic situation, have had a negative impact on the growth rate of the global economy, as well as created difficulties for most companies around the world. To give businesses a chance to survive in the light of the restrictive measures taken, a number of countries have announced the introduction of emergency tax breaks.

What benefits Kazakhstan introduced to support enterprises and how they affected tax revenues to the budget were analyzed by analysts FinReview.info.

The national economy loses 1%-1.3% of GDP due to tax incentives

Kazakhstan has introduced a number of measures to support small and medium-sized businesses, which partly stimulated the development of entrepreneurship during the pandemic. These include tax incentives, provision of cheaper loans and deferrals, reduction of administrative burden, improvement of the business climate, and prompt resolution of business issues. For example, SMEs were exempt from taxes and payments from the payroll fund for the affected sectors of the economy for six months, and until the end of the year they were exempt from social benefits, including pension contributions and MSHI.

However, these measures, which covered more than 700 thousand business entities, led to the loss of tax revenues in the amount of 1%-1.3% of GDP.

Last year, the state budget was replenished with 8.6 trillion tenge of tax revenues. In comparison with 2019, their volume decreased by 655.3 billion tenge.

At the same time, the fifty largest taxpayers, who form 46% of taxes, paid 3.9 trillion tenge, which is 32.3% less than in 2019. That is, the Government’s incentive measures introduced are effective and ensure the growth of entrepreneurship in the country.

In 2020, the main amount to the budget was traditionally brought by enterprises engaged in the production of oil and associated gas, they were located on 19 of the 50 lines of our rating. They accounted for 59% of all payments to the fifty largest taxpayers, or 2.3 trillion tenge. Compared to the previous period, the amount of taxes paid by these companies decreased by a record 46.6%.

The oil sector is followed by metallurgy, its share in the total volume of tax revenues amounted to 12.5% or 493.3 billion tenge.

Next in the ranking is the tobacco industry, which involves the three largest representatives. They paid a total of 271.5 billion tenge of taxes.

The fourth largest industry in terms of tax payments is the mining and quarry development companies, which added 200.9 billion tenge to the budget. The rating also includes representatives of the oil refining industry, telecommunications, banking, logistics, alcohol production, and engineering. 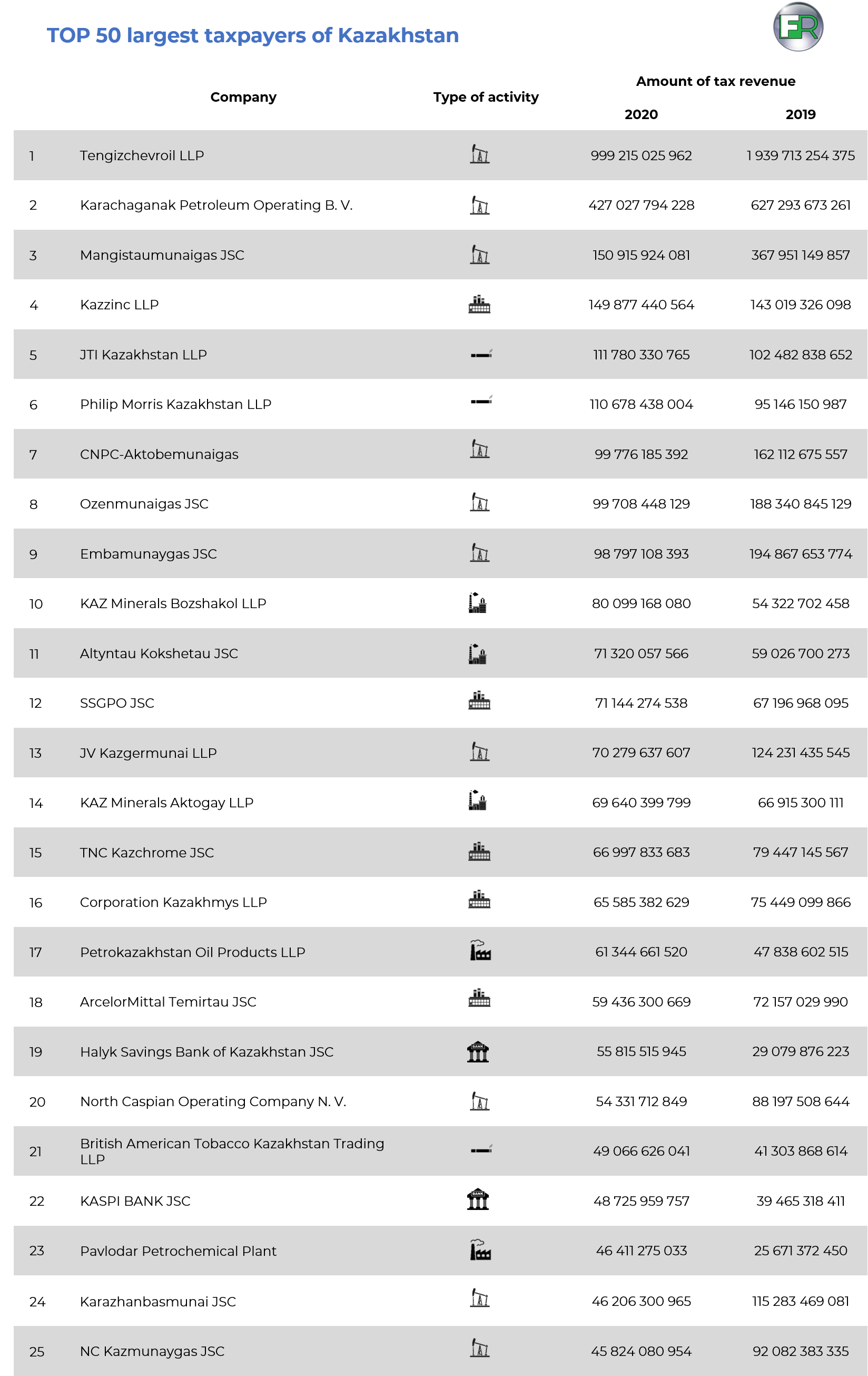 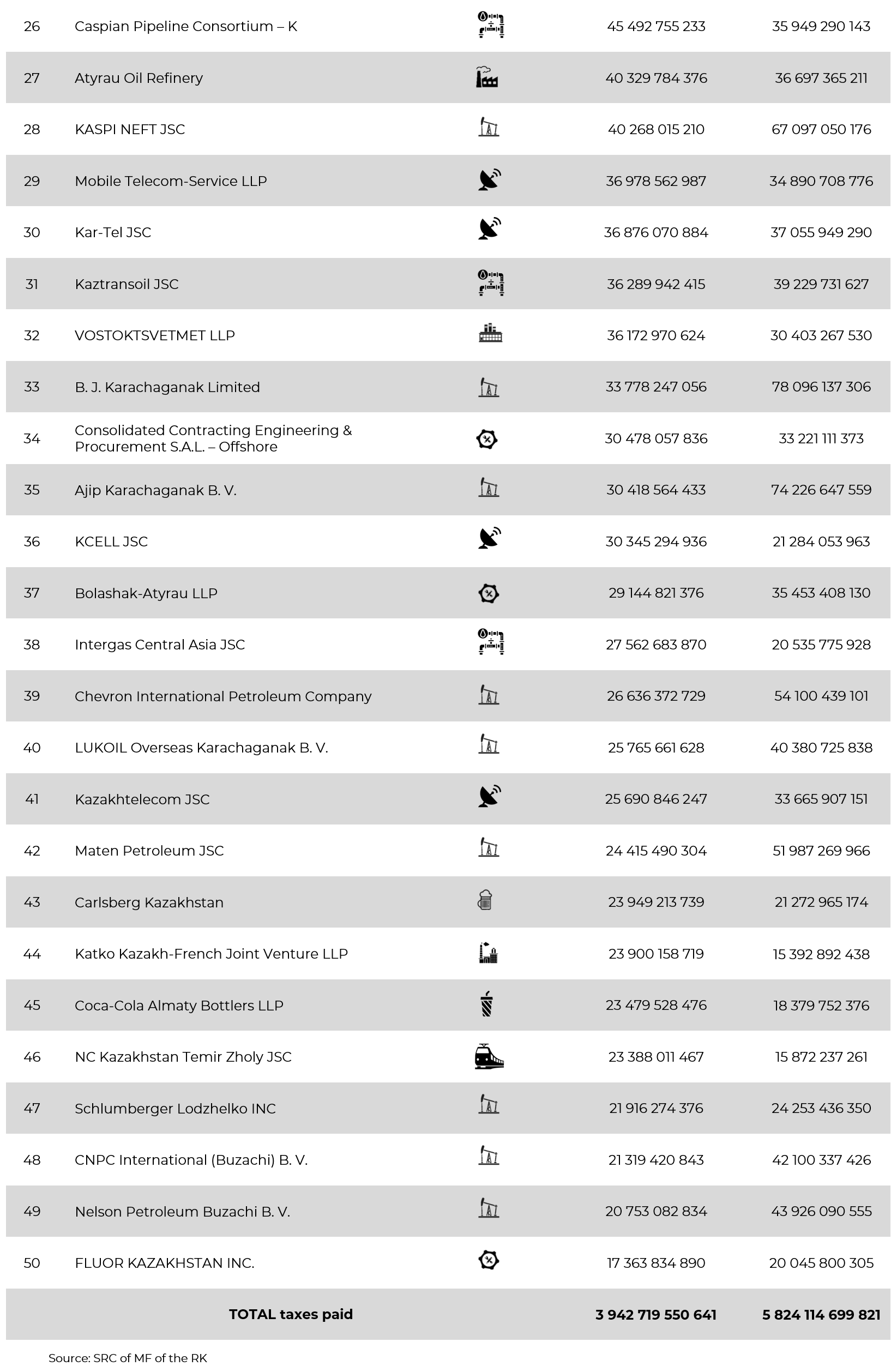