The national economy shrank by a record 2.6% in 2020 since the early 2000s, but the extent of the decline could have been more significant. The Government’s anti-crisis measures helped Kazakhstan avoid a deep recession.

The year 2020 turned out to be difficult and difficult, the world was plunged into a protracted crisis caused by the COVID-19 pandemic. Its active spread caused the collapse of oil prices, the volatility of a number of export goods and a decline in business activity. Therefore, the leading international organizations, whose activities are somehow related to the economy and finance, began to predict what awaits the world economy in the future. For example, according to an April report from the International Monetary Fund, the world economy will shrink by 3% in 2020 and grow by 5.8% in 2021. But according to the World Bank, the economy will sag more, falling by 5.2% in 2020.

Of course, these forecasts also affect the economic condition of Kazakhstan. How the national economy is developing, analysts understood FinReview.info.

It could have been worse

The economy of Kazakhstan in 2020 was immediately subjected to double challenges. First, this is due to the country’s excessive dependence on the state of the oil and gas market. At the moment, this risk has been fully realized — the price of oil fell below 25 US dollars per barrel during the year, thereby depriving the country of profitability from oil sales. Secondly, the quarantine measures introduced in the country aimed at regulating the spread of coronavirus infection have caused a slowdown in economic activity in almost all sectors.

The index of business activity during the year was below the marker value of 50 points, reaching a minimum level in April, namely 37.2 points and a maximum in December-49 points. Against this background, the real sector became the driver of economic growth, which grew by 2% at the end of the year. However, due to a significant reduction in the service sector, by about 5.6%, the national economy sank by 2.6%. This is the lowest mark since the early 2000s.

But according to experts and leading research agencies, the national economy should have declined by a more significant 3.4% – 4%.

Their use allowed us to provide the necessary support to businesses and the population, namely through the mechanisms of subsidized financing and tax breaks, providing direct transfers to affected citizens, as well as improving the availability of medical infrastructure. In particular, 1.4 million people were covered by employment programs, including 238 thousand people under the Employment Roadmap, 700 thousand entrepreneurs received tax breaks, 80% of borrowers of affected industries received loan deferrals, and about 40 thousand were financed. projects of entrepreneurs at a reduced rate.

As a result, almost all sectors of the real sector and certain types of services have moved into positive growth dynamics. This includes construction, information and communication, agriculture, manufacturing, and education.

At the moment, official statistics are only available for the first nine months of 2020. According to these data, GDP in annual change decreased by 2.8%, reaching 45.8 trillion tenge. The services sector was the hardest hit, losing 6.1% of GDP. In particular, the decline in the transport and warehousing sector was 17.1%, accommodation and food services decreased by 11.3%, and wholesale and retail trade decreased by 9.5%.

But, despite a significant decline in the service sector, some manufacturing sectors have successfully endured the consequences of the coronacrisis. Among them are: 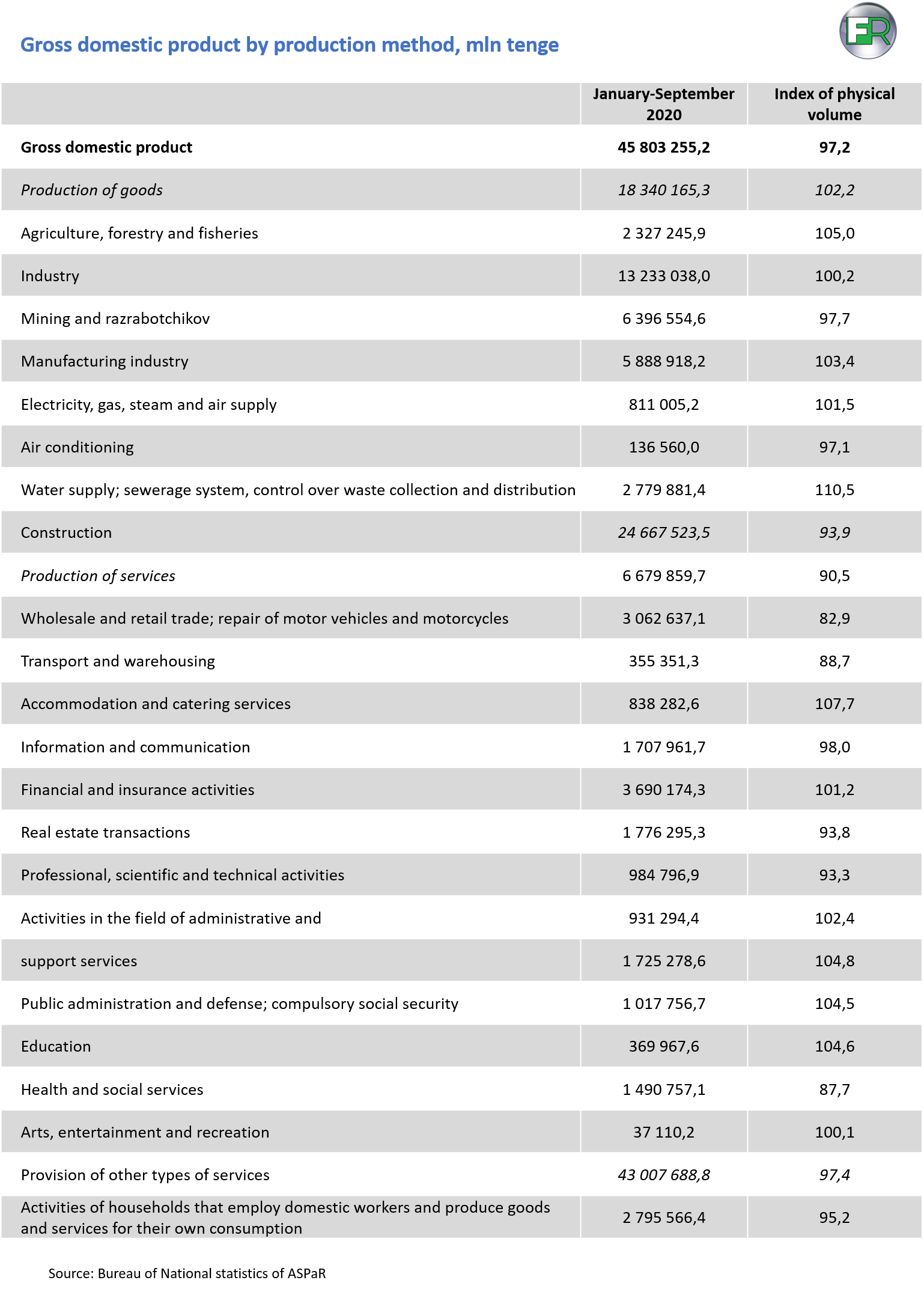 Thus, the consequences of the coronacrisis increased the demand for non-primary goods and thereby accelerated the diversification of the national economy.

The share of processing in the total volume of industry increased by 9.4 p. p.

The role of the manufacturing sector as the main driver of the growth of the Kazakh economy and the level of employment of the population has not yet been disclosed. But it has the potential to change the structure of domestic value added and diversify exports at the expense of non-primary goods. Already, the share of manufacturing in the GDP structure has grown from 11% in 2015 to the current 12.6%.

The growth is largely caused by:

However, the growth rate of the manufacturing industry is restrained due to the decline in production in the largest areas of the sector, in particular in oil refining (minus 4%), furniture manufacturing (minus 11%), chemical industry (minus 0.5%).

What is the economic significance of diversification?

First of all, this is a reduction in the volatility and instability of export earnings and a recovery in economic growth. Diversification can lead to an increase in total exports and does not necessarily mean that traditionally strong export sectors will become weaker in terms of global market share.

Another advantage is protection against a sharp increase in the real exchange rate caused by the inflow of foreign currency due to the export of resource goods during peak prices. This increase reduces the trade competitiveness of other exports. Without the creation of a wide variety of foreign trade goods, such as industrial goods, it is difficult to reduce dependence on natural resources, stabilize the exchange rate, create well-paid jobs, and bring about structural change.

Exports of products decreased by almost a fifth

In the first eleven months of 2020, Kazakh producers exported products worth 43.4 billion US dollars. This is 18.2% less than it was last year.

Significant export growth was achieved mainly by manufacturers of the manufacturing sector, namely:

However, there is a negative trend in the main commodity groups, which form more than half of exports. Among them are

The investment attractiveness of the country, as well as abroad, suffered significantly in 2020 — some projects were forced to be postponed or extended for a long time due to the unfavorable epidemic situation, while others were temporarily irrelevant due to a reduction in cash flow and a decline in demand. Therefore, the inflow of investment now depends more on the industry specifics. In particular, the volume of investments in oil production and refining fell significantly, while agriculture, food industry, pharmaceuticals, telecommunications, insurance, education, health and culture increased investment receipts.

However, as investment in the mining sector, which accounts for about half of total FDI, declined by 42%, total investment inflows declined by 48% in the first nine months of 2020 to reach 12.6 billion US dollars .

What awaits the national economy in 2021?

In a pessimistic scenario, when Brent crude oil falls to 30 US dollars per barrel due to a possible breakdown of the OPEC + agreement and a slower global economic recovery, the national economy will grow by an average of 2.3% – 2.7%.

In an optimistic scenario, if the OPEC + agreements are strictly implemented, and oil demand continues to grow rapidly, maintaining the price range at 50 US dollars per barrel, the domestic economy will grow by 3.8% – 4.2%.