A third of the tax revenues to the state budget of Kazakhstan are accounted for by the thirty largest companies with foreign participation.

The coronavirus pandemic has become a large-scale threat not only for countries facing an epidemiological outbreak. This is a global stress challenge for most sectors of the economy, the consequences of which are faced by companies around the world, regardless of the size of the business. In Kazakhstan, the negative impact of COVID-19 is amplified by the weakening of the national currency and a sharp decline in oil revenues.

In order to overcome the consequences of the pandemic, the Government has launched various tools to support the economy, including tax ones. This is not surprising, since a significant number of companies are experiencing a drop in demand for their goods and services and, as a result, a sharp decline in profits. Therefore, flexible management of tax liabilities, especially against the background of economic difficulties, becomes one of the most important tasks for any company.

Analysts FinReview.info they represent the rating of the thirty largest foreign taxpayers of Kazakhstan for 2020.

Over the year, the number of companies with foreign participation in Kazakhstan increased by 10%

As of the end of 2020, there were 22.6 thousand companies with foreign participation in the country. Compared to last year, their number increased by 2.1 thousand units.

Most often, foreign companies are involved in wholesale and retail trade — there are 8.8 thousand enterprises operating here. Next in popularity among foreign businessmen are the construction sector, which employs 2.4 thousand companies, and the sphere of professional, scientific and technical activities with 1.7 thousand operating enterprises.

Tax revenues to the state budget, after a steady five-year growth, have turned into a negative trend. At the end of 2020, the total amount of taxes paid decreased by 7.1% compared to last year.

In monetary terms, the budget was replenished by 8.6 trillion tenge. A third of these payments are made by the thirty largest foreign companies.

Traditionally, the main part of tax revenues is generated by the oil and gas sector, whose companies are located on 13 of the 30 lines of the rating. These companies account for 72% of all payments to the thirty largest foreign taxpayers, or 1.9 trillion tenge.

Next in the ranking are companies in the tobacco industry, where the three largest foreign players operate-JTI Kazakhstan, Philip Morris Kazakhstan and British American Tobacco Kazakhstan Trading. They paid 276.8 billion tenge of taxes.

The tobacco industry is followed by the metallurgical industry. Their tax deductions in total reached 217.4 billion tenge.

The rating also includes representatives of the construction industry, telecommunications, the banking sector, the production of alcoholic and non-alcoholic products, and engineering. 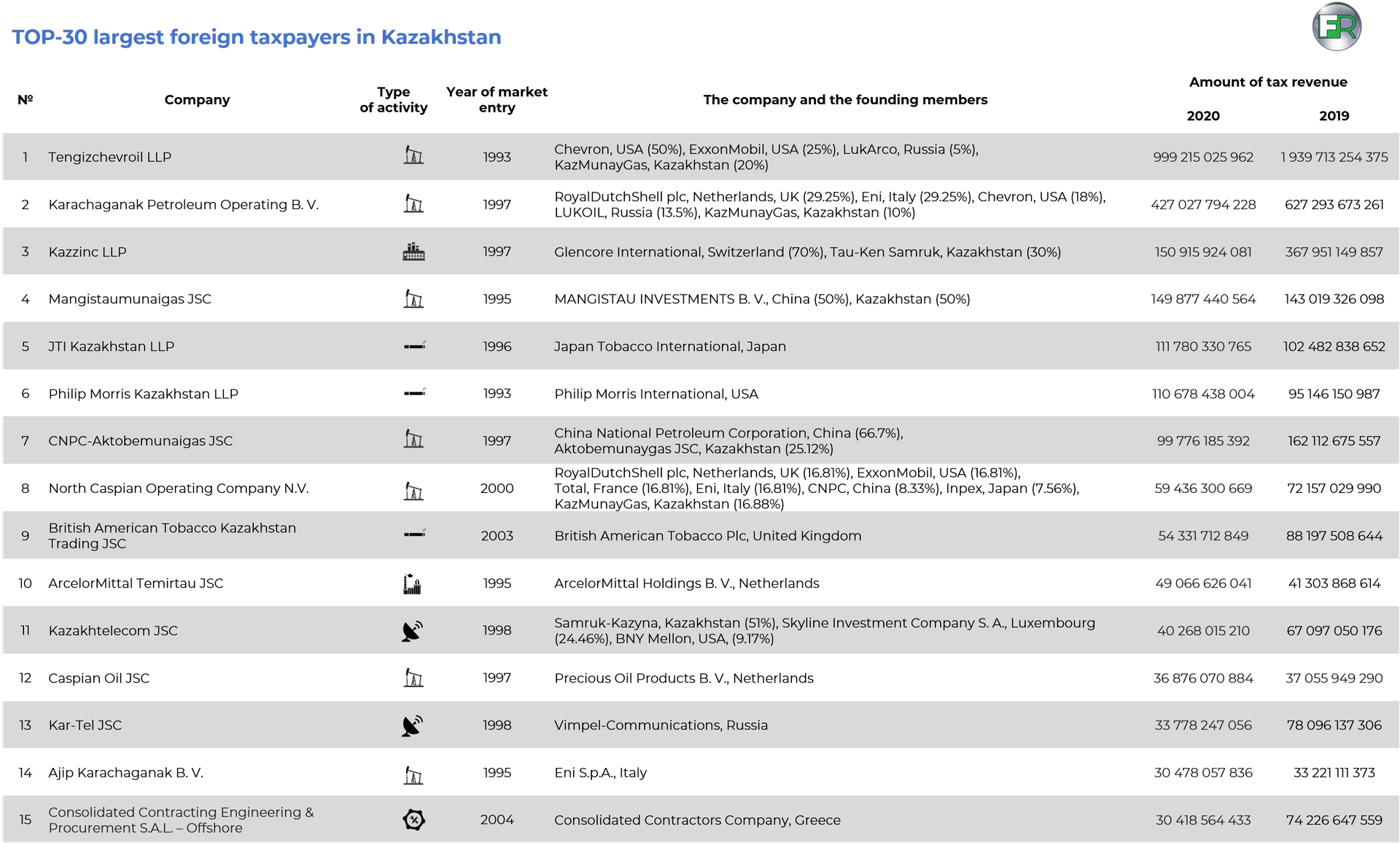 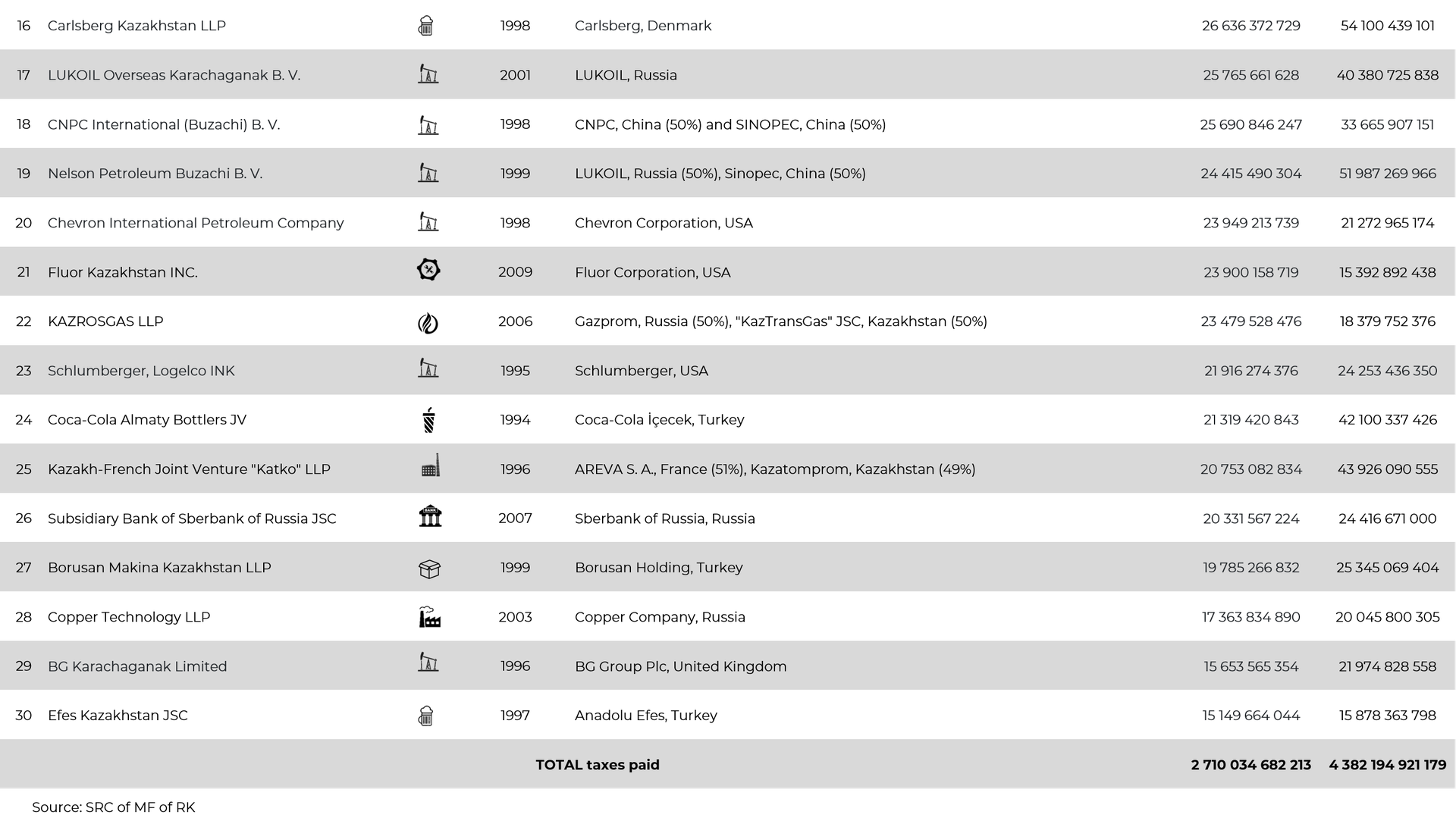 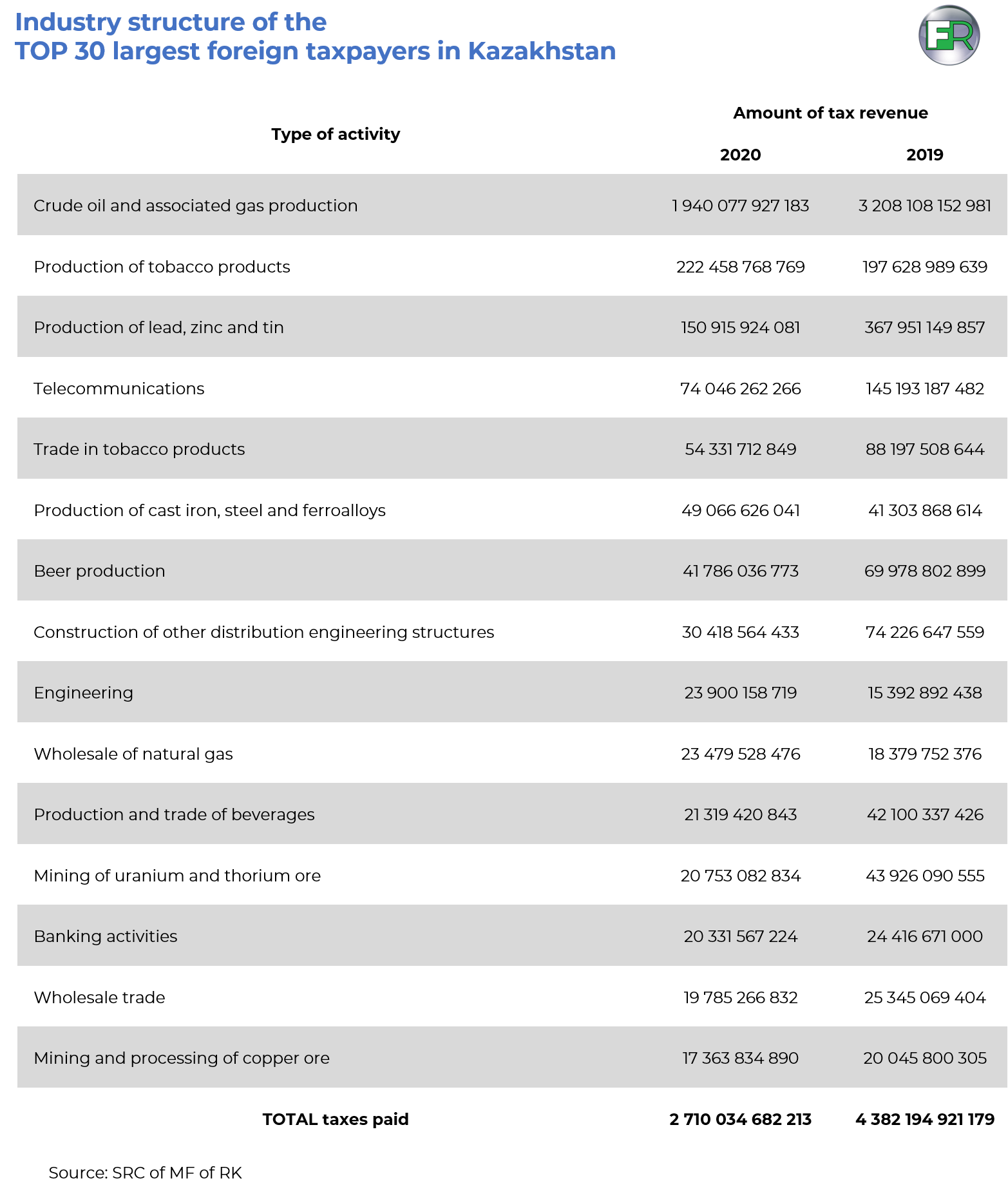