How much will housing become more expensive in Kazakhstan?

Housing in Kazakhstan is becoming more expensive not only because of the possibility of withdrawing pension savings. There are several reasons. How can prices be stabilized and will the growth continue?

In the summer of 2021, the growth of housing prices in Kazakhstan did not stop, contrary to the expectations of market experts and potential buyers. The income of the population has decreased, but the demand for the purchase of housing has remained high-largely due to the launch of a program for the use of pension savings by citizens. Both developers and owners of secondary housing, who are satisfied with the influx of buyers, benefit from the resulting hype. However, forecasts are increasingly being made about the imminent end of the boom in the real estate market.

How will housing prices change in the coming months, will there be a new jump in prices and when will the best time come for investing in real estate, FinReview.info analysts understood. 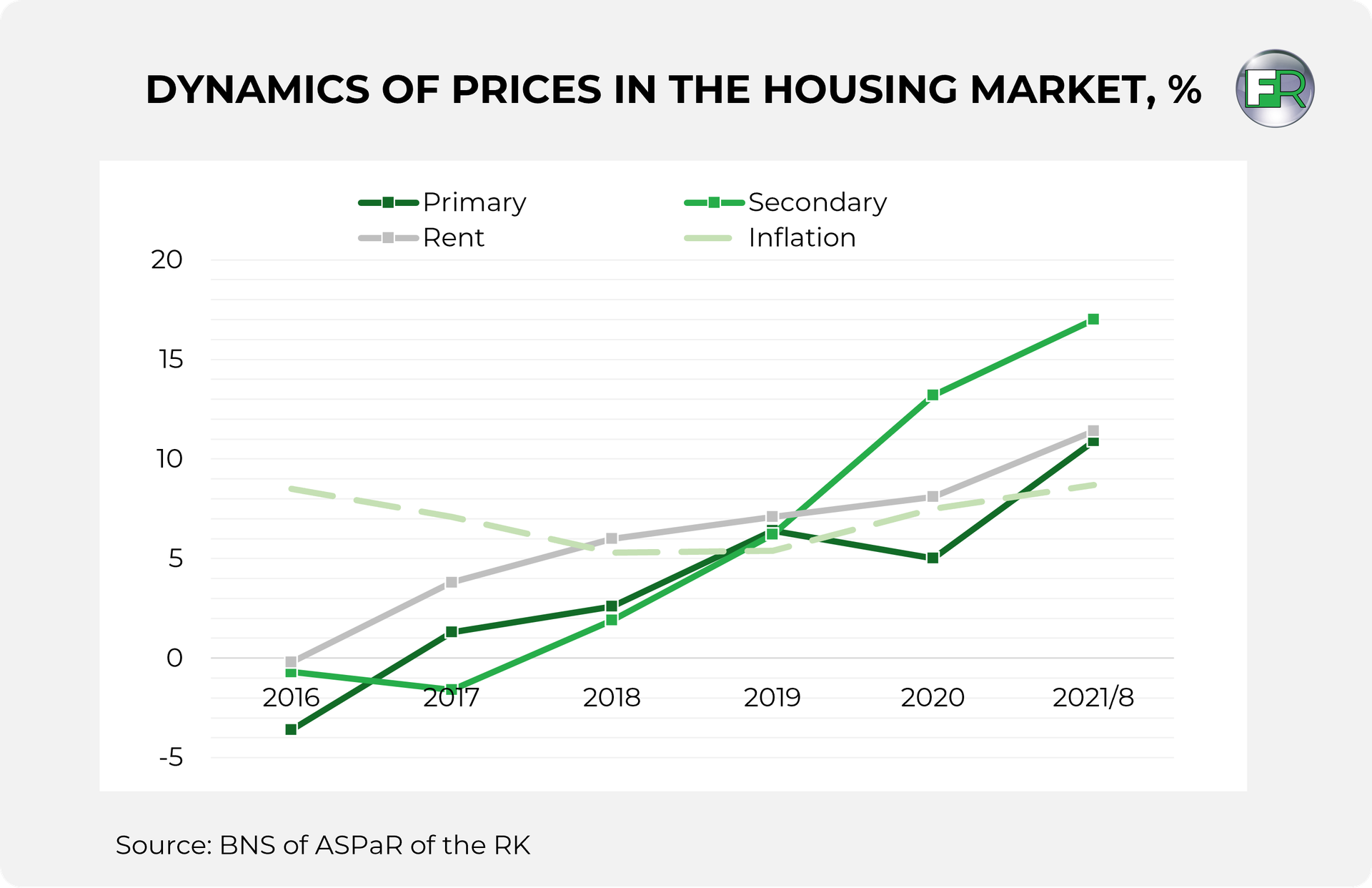 Only the capital meets the UN standards for housing security

The total area of the housing stock in Kazakhstan is 373 million square meters, most of which (64%) is concentrated in cities. At the same time, three megacities — the cities of Nur-Sultan, Almaty and Shymkent — form about 40% of all urban housing.

Accordingly, the regions are experiencing an acute shortage of residential facilities being built. According to the indicator of the population’s housing supply, which shows how many square meters of housing there are per resident, the republic significantly lags behind international standards. According to the UN recommendation, there should be at least 30 sq. m. of housing per inhabitant, and in Kazakhstan this indicator by the end of 2020 was only 22.6 sq. m.

In the regional context, the situation is worst in the southern densely populated part of the country. For example, in the Zhambyl region, there are 17 sq. m. of housing per inhabitant, in the Turkestan region — 18.7 sq.m., and in the Almaty region — 20.2 sq. m. Compliance with the UN standard is ensured only in the city of Nur-Sultan, where 30.5 sq. m. of housing per inhabitant.

In order to increase the housing stock, the state needs incentive measures for both residents and construction companies. One of these measures is a mortgage.

Mortgages in the context of a pandemic

An interesting fact is that in the coronavirus 2020, the mortgage market slowed down the pace of issuing loans only for the lockdown period, from March to May. But since June, the market has recovered losses and even restored mortgage lending to the pre-crisis level.

This year, the upward trend continued and was largely ensured by the possibility of early withdrawal of pension funds by citizens. Banks have felt a sharp influx of customers — over the past eight months, about 264.5 thousand Kazakhstanis have used pension savings to buy housing. Another 131 thousand people have repaid their mortgage loans. In monetary terms, more than 1.7 trillion tenge was transferred from pension accounts.

In turn, mortgage loans were issued by banks in the amount of 892.7 billion tenge over the past seven months. However, here commercial banks have acted only as distributors of money, and the state is pouring funds into the market. The preferential mortgage programs “7-20-25” and “Baspana Hit” financed by him, the affordable lending programs of Otbasa Bank, as well as social lending programs for various groups of the population have become a stimulating effect for the development of the mortgage market.

Why is housing becoming more expensive?

Firstly, there is a high demand. The primary feature here is the concentration of the mortgage market. The main part of it, or 52%, is traditionally concentrated in the cities of Nur-Sultan and Almaty. A quarter of the market is formed in Mangistau, Aktobe, East Kazakhstan and Karaganda regions and in the city of Shymkent.

In these regions, the growth rate of mortgage lending in 2021 reached from 12% to 23%, and the commissioning of new housing grew from 13% to 24%. That is, there is a high demand on the market, caused by the possibility of using pension funds, the action of housing state programs and the expansion of lending by Otbasa Bank. And as you know, demand creates value. Therefore, in August, primary housing rose in price by 10.9% compared to December 2020 and reached 343.8 thousand tenge per sq. m., and the cost of well-maintained housing increased by 17% to 272.8 thousand tenge per sq. m. 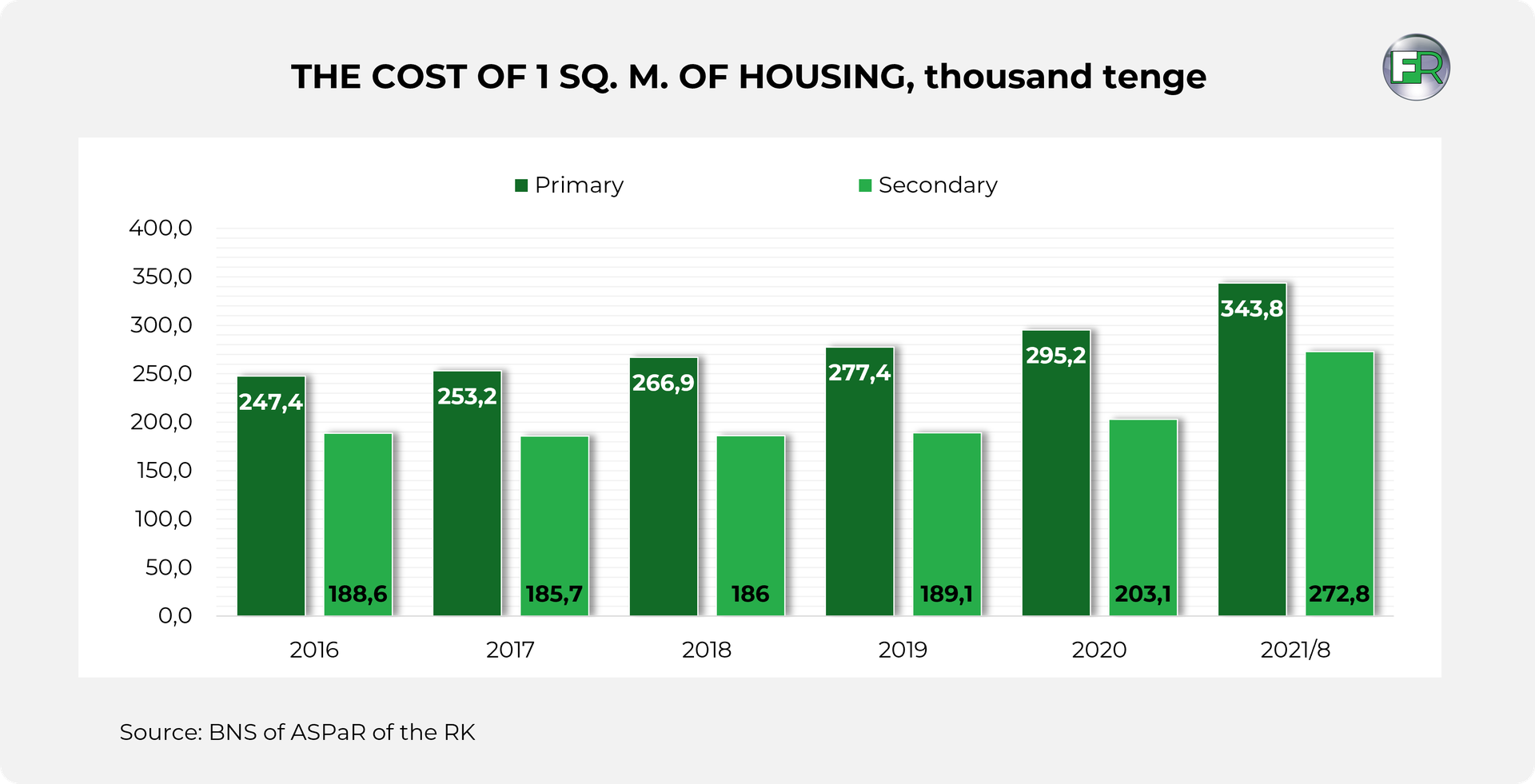 Secondly, there is a shortage of housing. This is one of the key reasons for the growth, which, given the current dynamics of the housing market, will continue in the next 15-20 years.

Thirdly, the high cost of building materials. Domestic demand for construction materials is not closed by domestic manufacturers. For some types of products, the share of imports exceeds 80%. For example, flat glass is completely imported from abroad.

The high level of imports, in turn, negatively affects the country’s trade balance, putting pressure on the national currency, as well as on economic activity. According to the Bureau of National Statistics, for the first seven months of 2021, the import of construction materials reached 368.5 million US dollars, which is 16 times higher than exports.

Of course, this is a serious blow to real estate pricing.

Investments in the construction sector will help to stabilize prices

The construction sector is one of the priorities in the development of the national economy. To stimulate its growth, state support measures are being implemented in the country within the framework of the SPIID for 2021-2025, the Entrepreneurial Code, the “Economy of Simple Things” and the “Road Map—2025” programs, as well as through special economic zones.

Obviously, monetary investments are needed to increase the volume of construction work. However, statistics show that the working capital allocated to increase production capacity for the first seven months of 2021 consisted of 97% of the companies ‘ own funds. That is, the development of the sector is limited by the finances of the companies themselves, and this makes the sector vulnerable to local and external factors.

In addition to the development of industrial capacities, Kazakhstan is in urgent need of its own factories for the production of building materials. Investment funds, which are actively engaged in attracting in the country, can help in this.

Private investors are already showing increased interest in Kazakhstani construction companies. In July 2021, Megastroy LLP, a subsidiary of BI Group Holding, issued coupon bonds worth 6.3 billion tenge on the Astana International Exchange (AIX). This was the second placement after the debut issue in March and once again demand exceeded supply.

In terms of foreign direct investment, the picture is less positive. According to the results of the first quarter of 2021, 216.9 million US dollars of investments were attracted to the construction sector, which is 9.8% more than it was last year. However, in comparison with 2019, the indicator immediately decreased by 34%.

Of course, attracting investments and their impact on economic sectors is quite a long process. Kazakhstan is institutionally prepared to work with foreign investors. The question remains in time, as investors are showing interest in the Kazakh market. For example, the created jurisdiction and regulatory framework of the AIFC attract investors — the volume of their investments in various sectors of the economy has already reached 5 billion US dollars. Of these, 3.6 billion US dollars is direct investment and 1.4 billion US dollars is portfolio investment.

In the meantime, we can only expect a rise in the price of real estate

The cost of construction in Kazakhstan has increased significantly, especially during the coronacrisis, when production capacities were reduced with a sufficiently high demand. Food and non-food products were among the first to experience an increase in prices. Their cost increases by an average of 15% -20%. And real estate is already catching up with this trend.

In the next 10-15 years, the situation will not change and housing will continue to become more expensive. According to our forecasts, by the end of the year the cost will grow to 355-365 thousand tenge per sq. m.