“High-quality education, healthcare, social policy, infrastructure, creation of new jobs – this is what the state should be attending to today,” Kairat Kelimbetov.

What is the difference between national projects and government programs, what priorities are we talking about, what effect will they give to the country and how will they be implemented? Chairman of the Agency for Strategic Planning and Reforms of the Republic of Kazakhstan Kairat Kelimbetov spoke about this and many other things in an interview with director of the TALAP Center for Applied Research Rakhim Oshakbayev.

The interview is available here, but we, FinReview.info analysts have collected the main thoughts from the Mr. Kelimbetov’s speech. 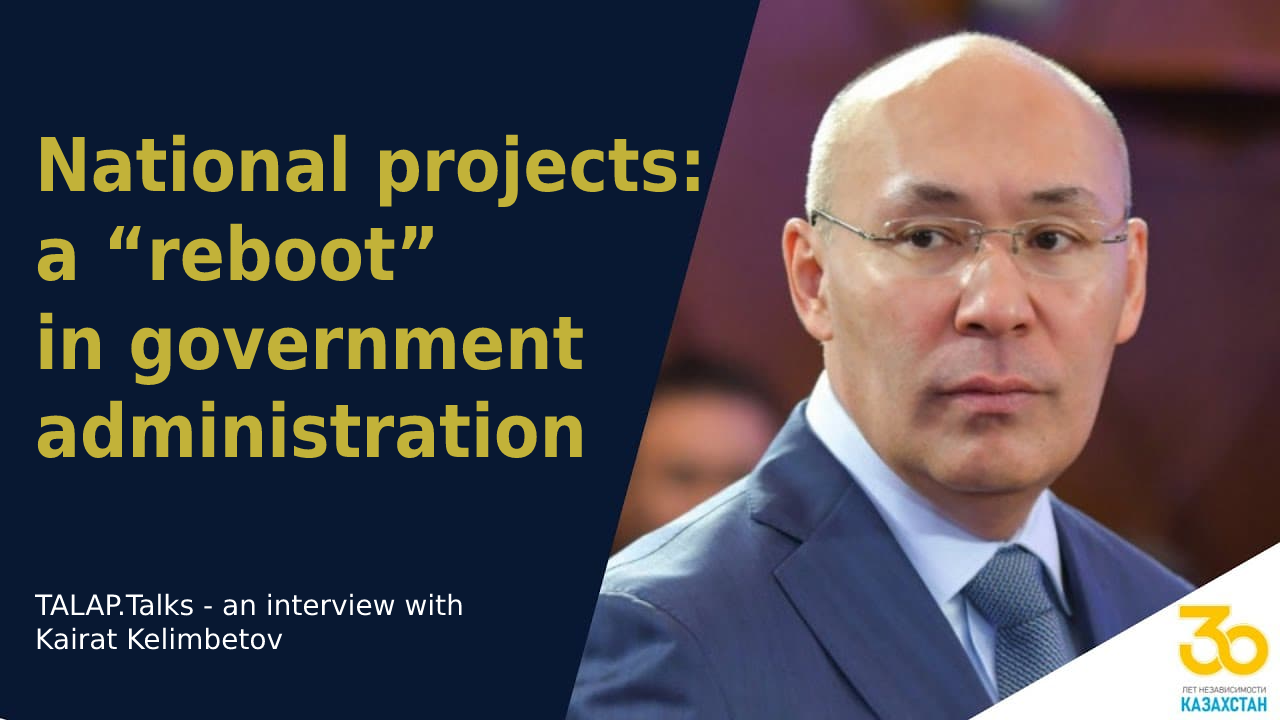 On September 1, 2020, head of state Kassym-Jomart Tokayev delivered a state of the nation address to people of Kazakhstan, where he set a serious task for the Government to reboot the public sector, including the transition from cumbersome state programs to modern national projects. The “Kazakhstan-2050” Strategy became the foundational document for the creation of national projects, from which medium-term and short-term documents follow.

One of the most important principles of modernisation of the public administration system, as the President defined, will be the model of a “listening state.” The state should concentrate on the creation of public goods in its actions. Education, high-quality health care, social policy, infrastructure, creation of new jobs – this is what the state should be attending to today.

At a certain stage, government programs have played an important role and have achieved good results. But to conceptually continue the development of the achieved goals, they need to be modernised. The best practices that were laid down in state programs later became an integral part of national projects.

Modern global economic changes have affected the public administration system. First, the devaluation of raw materials that occurred in 2020 clearly demonstrated the need to decarbonise the economy. Secondly, the development of digitalisation has radically changed the process of interaction between the state and the population. Third, the coronavirus pandemic has shown most clearly what education and health systems should look like. The whole world is currently shifting to project management, in which the key is that all projects must be measurable, achievable, specific and have a certain period.

State programs were ministerial in their nature. That is, each ministry got used to having its own state program and concentrated only on the fulfilment of tasks within its framework. We have changed the ideology: now the state bodies will be united by a big goal. For example, the “Healthy nation” national project involves not only the development of health care, but also the training of qualified specialists in the field of health care, cultural development, sports.

We have formed 10 national projects, in which we have identified 9 mega-indicators, consisting of more than 200 indicators. Each indicator is assigned to a specific agency responsible for its achievement. A clearly evident and understandable system of public administration has been formed. For example, increasing life expectancy to 75 years is one of the indicators of the national project. The entire Government will work on this task, and a certain indicator will be assigned to each state body.

The preliminary list of national projects was approved in January 2021. Then, when the Nur Otan Party Development Roadmap and the National Development Plan of Kazakhstan until 2025 were being prepared, international and domestic experts were involved to form an evaluation. These are the World Bank and the Big Four companies. The remarks and recommendations of the International Monetary Fund, the European Bank for Development and Reconstruction were considered. We also enquired with members of the Parliament. All their suggestions and recommendations formed the basis of national projects.

Also, commissions will be created to monitor the effective use of funds allocated for the implementation of national projects. Three sources of funding stand out. The first is the republican budget, which money will be directed to mandatory socially significant areas. This includes national education, health care projects, strong regions, “Green Kazakhstan.” The second source is funds from the local budget, which will also be mainly directed to socially important areas. The third is investment. Note that 80% of funds will be attracted through investments.