Bright prospects: how much will the oil cost?

The oil market has largely recovered. Oil consumption in the countries that determine the global demand for hydrocarbons exceeded the indicator of April 2020. Now the countries have moved to a phased increase in production. How will this affect the price of oil and what are the prospects for the oil market?

By the end of 2020, the mood in the global oil market changed from negative expectations to cautiously positive, thanks to news about vaccination, the recovery of the stock market, measures to support the economy and the growth of business activity around the world. Even in the future, the risks of another outbreak of the pandemic and overstocking of the market due to the periodic growth of oil reserves in the United States did not have a significant impact on traders.

Nevertheless, oil and gas industry experts are cautiously optimistic about the prospects for the recovery of the oil market and do not rule out the possibility of a repeat of the events of 2020, when Brent crude oil fell to record low prices. Therefore, analysts FinReview.info we studied the current state of the market and prepared a forecast for its development.

Now the oil market has largely recovered. Oil consumption in the countries that determine the global demand for hydrocarbons exceeded the indicator of April 2020. However, in comparison with April 2019, the growth is observed only in China. In the other leading countries, such as the United States, the EU, and Japan, the average decline in consumption was from 5% to 10%. 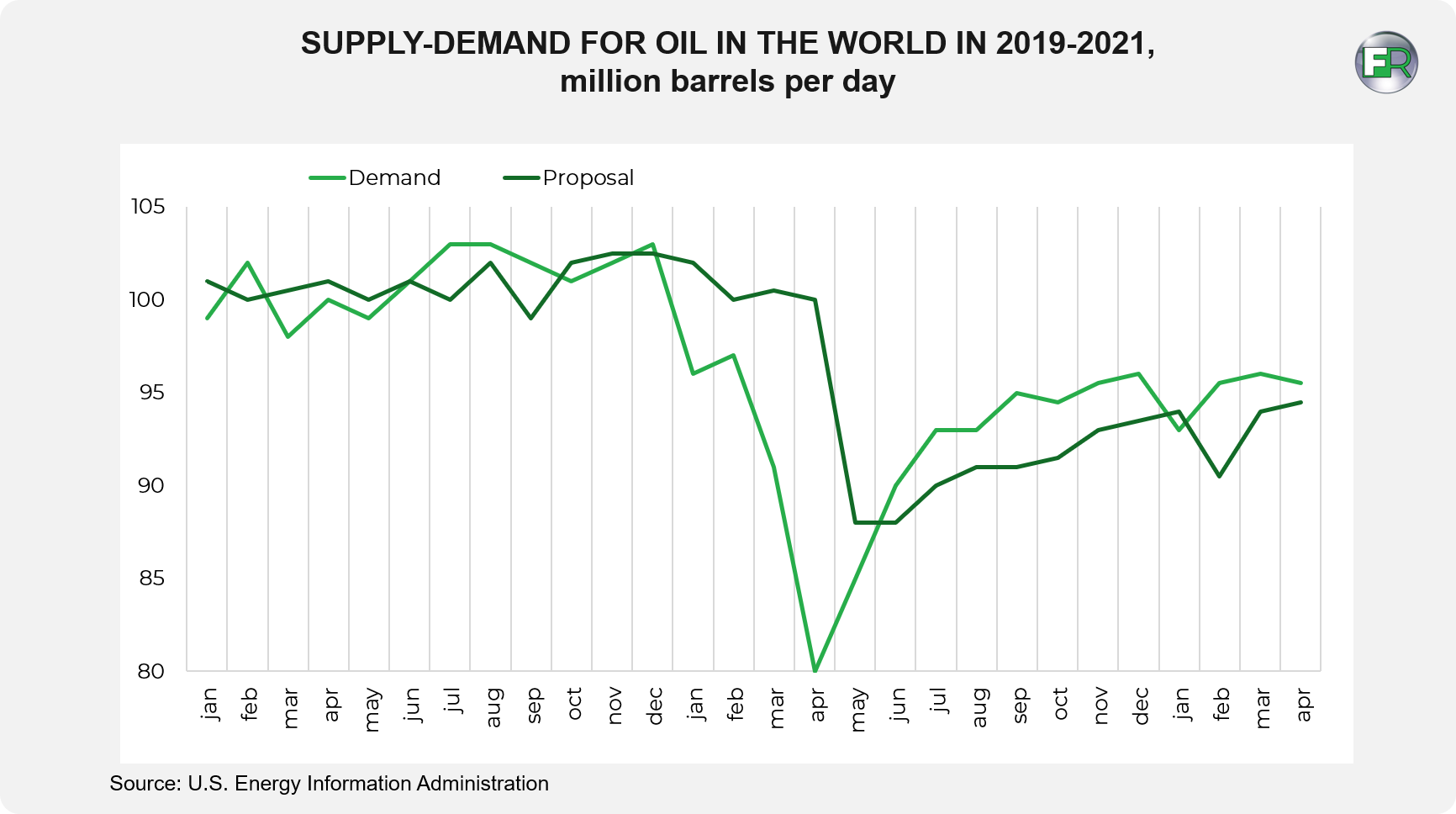 According to the International Energy Agency and the US Energy Information Administration, the average annual demand for oil by the end of 2021 will grow by about 5.4-6 million barrels per day compared to last year. That is, the difference from the pre-crisis indicators will be about 2-3 million barrels per day, and the full recovery of the market will be achieved only by 2022-2023.

The rally in oil prices, which has been observed since the beginning of the year, slowed down somewhat due to the rise in US bond yields in the second half of March. As a result, the quotes of Brent crude oil were fixed in the region of 60-70 US dollars per barrel.

Prices were supported by the January decision of OPEC+, according to which the production of black gold was lowered due to additional voluntary cuts from Saudi Arabia by 1 million barrels per day.

Of course, it is quite risky to increase oil production now because of the uncertainty of the situation with the pandemic. However, OPEC+ believes that in the second half of the year, the recovery of the global economy will accelerate, which should lead to an increase in energy demand. Thus, by increasing production now, countries are taking a step ahead of the curve.

Nevertheless, a price increase above 75 US dollars per barrel in the next three years is unlikely

The forecast of oil prices in the current conditions can only be made as a scenario, since at the moment there are uncertainties in all the parameters necessary for forecasting-these are the uncertainties of demand, supply and financial markets.

Holding back the forecast is also the fact that the OPEC+ member countries are not interested in maintaining too high prices, which can allow shale companies to recover in the United States. The current level of the total cost of shale production is close to 50US dollars per barrel. OPEC + balances the market against this level, limiting the sector’s profits and preventing it from recovering too quickly.

Therefore, the approximate price of oil in the next three years will remain in the range of 60-70 US dollars per barrel.

Now let’s look at the prospects for the development of the oil market in Kazakhstan.

While maintaining current oil prices, revenues to the National Fund will grow by more than 800 billion tenge

Perhaps OPEC+ will adjust the current agreement more than once. The approval of such strategic decisions allows you to save the transaction, which is not only important for the market, but also beneficial for the Kazakh budget. Approximately, the agreement brought the country more than 500 billion tenge of additional revenue in 2020 due to an increase in prices from 25 US dollars to 50 US dollars per barrel due to its implementation. If current prices remain at the level of more than 60 US dollars per barrel for the whole of 2021, Kazakhstan will be able not only to cover the budget needs, but also to increase payments to the National Fund by more than 800 billion tenge.

However, the oil and gas industry needs additional funding

Domestic oil production has its own characteristics that must be taken into account when making operational adjustments to production. For example, due to geological and technological conditions, the change in the level of production by companies occurs due to the suspension of existing wells or the revision of investment programs in terms of drilling and major repairs, which takes a long time. Therefore, Kazakh companies need clear guidelines for restoring production volumes. Moreover, after the expiration of the OPEC+ agreements in April 2022, Kazakhstan will have to increase oil production by 5 million tons per year, which requires additional funding.

However, now there is a decline in investment revenues in the country. By the end of 2020, the volume of foreign direct investment in the oil and gas industry decreased by 47% and reached 6.5 billion US dollars. Obviously, this decline poses a threat to the recovery of the oil market in the future. Therefore, to strengthen the immunity of the economy, international financial integration is necessary, which just contributes to an increase in the movement of capital compared to commodity flows. The transfer link of such integration in Kazakhstan is the Astana International Financial Centre.

To date, the AIFC participants have already invested 1.6 billion US dollars in the development of financial technologies, construction, agriculture, manufacturing, and tourism. Of these, 1.4 billion US dollars was raised in 2020 and 2021. Of course, these indicators determine the effectiveness and usefulness of the financial center as a platform for attracting investment and developing economic sectors. And accordingly, the AIFC is becoming a key financial link in the recovery of the national economy after the consequences of the coronacrisis.